Why marketing can be a risky business (and why that's OK)

Why marketing can be a risky business (and why that's OK)

Welcome. My talk today is: why marketing can be a risky business, and why that is okay.

So, we’ve had a pretty tricky year, actually, within marketing. We’ve had some really tricky headlines to deal with. We’ve had some quite tough headlines. There’s a lot of brands that have had quite a big slamming, actually, in the press, in terms of some negative backlash.

We’ve had people on social media really hitting home, if brands have tried it out there, and been a bit risky, in terms of what their social campaigns are going to be. And we’ve had brands very recently – like that one [McDonald’s] – where, actually, they’ve got a really bad public backlash, and they’ve had to really quickly change their approach, in terms of their campaign strategy.

Now, for me, this makes me worry about 2018, in terms of whether brands are going to start thinking they have to play it too safe, and play it safely with their campaign strategies for next year.

When risk-taking pays off

So, I could have chosen any adverts to show you, but I’ve chosen an oldie but a goodie. The reason I’ve chosen the advert that I’m just about to play, it was about 10 years ago, when it first came out. When it first came out, I remember that I’d just started in digital marketing and, at that time, I was obviously doing briefing, in terms of the usual way, of: “how do we get to the audience? How do we do the right positioning?” And when this ad came out, I thought: “How did they actually brief this? How did they make this happen?”

Pretty impressive, right? A little bit of goose bumps. So, I could have chosen any of these campaigns. These were brilliant campaigns that really broke the mould, and they really took a risk, and that’s the important thing. That’s what I want to talk about today, about why risk taking is actually essential, in your marketing campaigns.

Why it’s essential to take risks with your marketing

First of all, why is it essential? Well, you need to distinguish yourself from the competition. If you’re doing the same types of campaigns as everybody else, you’re never going to stand out. You need to create visibility and recognition.

You obviously, you need to break through the mould, as well. If you take the same old strategy every time, and you deliver the same campaigns, you’re going to get the same results back. So, you need to change up what you’re doing. You need to really break that, and not create plateaus.

The other thing that you need to do, from creating risk, is encouraging loyalty. There’s a lot of brands that will be worried about polarising some audiences, and actually, what you can do is create such a loyalty with another set of audience, that it’s totally worth the payoff.

Risks you should never take

There’s some risks that you should never take. So, it should never be executional only. It should always be driven by and grounded by a really good core strategy, and a really key insight about your brand.

You should never take risks without boundaries, so you need to let people think creatively, about what you’re going to do for your campaign, but you need to set the guidelines and the boundaries around what they can be creative with.

You should never do risky campaigns that can jeopardise trust, and that’s trust with your customers, with your partners, and with your internal teams.

How to approach risk-taking

So, there’s a way to approach risk-taking, which actually mitigates it as much as possible, and I think people don’t realise this. When brands are going out there with, really, what seem risky campaigns, there’s a lot of preparation for it, to make sure that they’re mitigated as much as possible.

Understand the level of risk you can take

The first thing that you need to do is understand the level of risk you can take. So, this is one example. If you’ve got a really high growth market, if the stakes are really high, competitors are pushing the boundaries, which means you’re going to get a lot of disruptors, as well. That’s the perfect scenario, where you can actually deliver quite a high amount of risk.

There’s nothing else to lose, really. It’s exactly the same as any type of gambling, and understanding the level of risk you can take, as well. Think about what that looks like in practise. So, when you’re thinking about your 2018 marketing strategies, does it actually make sense to have an always on test campaign, throughout the year? Could you have that, so that you’ve got a protected amount, where you can actually use that to try new things? Or does it make sense to actually take a risk, in terms of short, smart strategies and short, smart campaigns with new media platforms, for example?

Stay true to your brand values

Cat G, in our team, our Senior Content Strategist, did a great talk on that last month, so you can find that online, if you want to find anymore detail about how to really understand the core of your brand. [Tips to building an editorial guide].

Be brave with your briefs

So, I obviously questioned that. From that, I obviously got a lot more information, but just the very fact that they’d started off with that as the brief meant that I had a real confidence that they wanted me to try something new, and innovative. And essentially, it was one of the coolest campaigns that I’ve ever worked on. It was completely new, and it broke boundaries, and it actually got a Google case study out of it.

The next thing: don’t be formulaic. Sometimes, as brands, we just stick to the same type of briefing. So, we think about who the audience is, how we’re going to position, what we’re going to target.

Actually, what doing something the same way as Cadbury’s did, which is, their brief for that particular campaign was just: “Get the love back.”

They’d realised there was a plateau, in terms of the audience that they were trying to get to, and customers had fallen out of love with their brand. So, they just literally put on the brief: “Get the love back,” and that’s where the agency came back with that idea. So, bring in the emotion, and really think about how you want people to think and feel after they’ve finished with your campaign.

The next thing is, create a safety net. This is about getting the right levels of control in. So, there’s no excuse nowadays, once you’ve actually come up with a campaign – even if it’s post-idea but pre-live – you can still get testing in. So, there’s some great things that you can do now. You can research in beta, you can do focus groups, go back to basics, and you can do that litmus test approach. You can really put it out there in that sort of beta approach, and see what people think of it.

Apply the right level of control

The next thing is applying the right level of controls. So, have you got the right setup, to be able to get really quick reactions to negativity? Some of the campaigns that we’ve seen this year, that have come back with really negative comments on social media, actually, as long as you’ve got your community management set up in the right way, and you can quickly pick up on that, it’s not a problem.

Imagine worst case scenario. So, think about What could happen from this campaign if it’s quite a risky campaign to do, and what you’re going to do from that. Also, what’s your Plan B? Potentially, if you have to tweak a campaign, make sure you’ve got that out in the ready, so you can really quickly adjust it?

How to measure a risky campaign

And measurement, don’t just focus on ROI monetary value. We all know that it ends up in monetary value, further down the line, but think about more in terms of emotional response. So, how do people…how are they expected to think and feel, about your campaign?

Think about some of the more upper funnel metrics that we look at, which is, engagement and awareness, and also, set yourself up to think as a team. Failure can also equal success, but it’s success in learning. It’s understanding what is going to work better in the future, and how to refine and make your campaigns even stronger.

So, I’ve put some examples here of some great risk-taking. I’ve put it around some of the “never dos,” that we all know. So, one of the first ones is, never do toilet humour. Think most brands would probably adhere to that.

So, Charmin, who are a toilet brand, they actually decided to do some toilet humour, which is obviously against brand guidelines, but they tied in with Guardians of the Galaxy, when they first came out a couple of years ago. They understood some of the marketing that was going to come around Guardians of the Galaxy, so they came out with this Tweet, at exactly the same time. Everybody’s seen that.

So, they stayed true to their brand guidelines, but they’ve really taken on, they’ve taken a risk, but they’ve also really put it within the story of Guardians of the Galaxy. It did brilliantly, just in the first day, it got 3,000 re-Tweets, and it kind of went on to even more success.

The next one is, never swear. Million Dollar Shave Club, they’ve got, their whole brand is really around swearing, and actually creating in your face-type language for people. So, their whole campaign was around: “Our blades are fucking great,” and they got 18 million views, and that was in the first two weeks of that launching.

So, they kept to their brand guidelines, kept on to the messaging. They got three times more impressions, than all of the other platforms combined. They had a huge spike in revenue, and 90% of their traffic through this campaign was from first-time visitors.

Brilliant campaigns. And that’s it – now go and create your own gorillas! 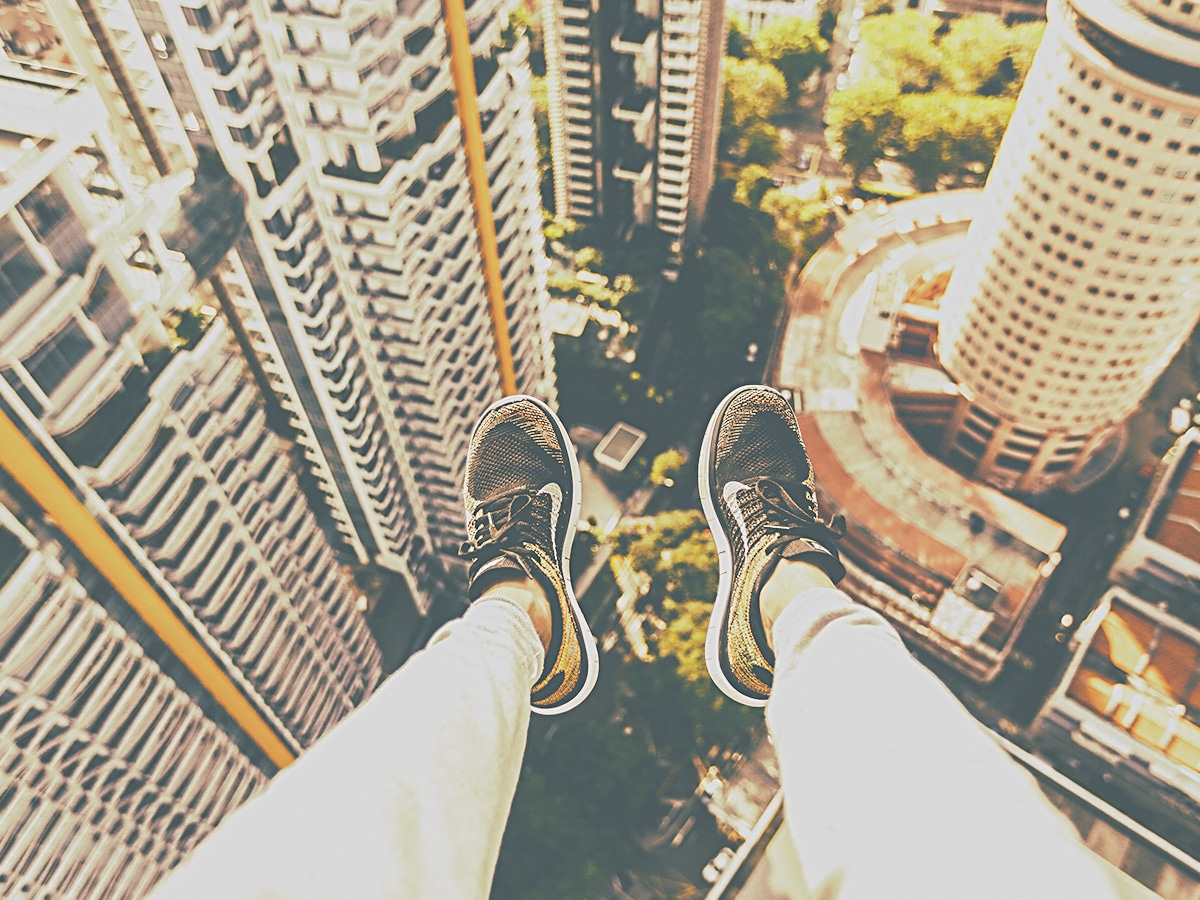