Why marketing and advertising gets a bad reputation

I think this is to do with a lot of preconceptions of what society thinks of marketing and advertising. So you start thinking about things like this, in the ’70s; and more recently, how adverts have been portrayed on websites, such as this.

We’re either being kind of put into two buckets. We’re the tricksters; we’re the people that try to sell you things that you don’t really need, or sell you things that are going to harm you. Or, we’re the annoying people that keep shouting at you when you want to just try and get something done. So, yeah. We’ve kind of been put into those categories. I think after a while, it starts to take its toll.

Why advertising is important

But I think we can all agree that advertising, especially in the digital landscape, is becoming ever more important and prominent. Especially with some of the models that you can clearly see from the big guys trying to monetise things as much as possible, so they can get you to advertise through their services. So, we can’t avoid it.

Does this mean that our souls are forever doomed into the fires of hell? Or, can we actually advertise with a clear conscious. I absolutely think we can, and I’ll try to explain why.

If you’re familiar with some of my talks, I tend to go quite broad and try to kind of capture this sort of feeling within it, so I’m going to do exactly the same thing here, so I hope I can keep you on track, so here we go.

Let’s take a step back…

I’ve recently been reading, via audiobook, Carl Sagan’s Cosmos, through a recommendation from my friend. I’m not necessarily someone who’s interested in astronomy, but I kind of took two real important nuggets from it that I’m going to try and connect with what we’re saying here, okay?

The first one was perspective, so Carl talks a lot about the size, just the vastness of the universe as a whole and how that is in comparison with us as individuals on this earth. I wanted to try to illustrate that the best way possible, so I found something here. Some of you may have seen this already.

[Speaking alongside video] This is Louise, in the Google plex. Google headquarters. Coming up to San Fran. Western USA. Planet earth. There goes the moon. Some asteroids. There’s our solar system. Where’s the earth now? Can’t even see it. There’s Voyager, coming back, going out, few little comets going on. It’s a light year away now, so that takes a year for the light to reach that point. Further and further. Keep going. Now, there’s our galaxy, fun, Milky Way, and then there’s some other stars going on. There’s some more galaxies and more planets. There’s a super cluster, whatever that is. And then the cosmic web, which is 10 billion light years away, which looks a bit like white noise.

So that kind of puts it into perspective of where we are and what we are in comparison to everything that exists, to our knowledge. That’s just one thing. Settle with that for a minute.

The best way I can describe it, if anyone’s seen Interstellar, it’s the bit where he’s trying to shout from earth behind the bookshelf, and he’s in what is known as a tesseract; that, kind of, void between time and space. If you are really interested in it, read up on it, because it’s very difficult for me to describe straight away, but it ultimately is that dimension that we can’t necessarily comprehend as human beings.

Our perceptions are limited

This is the point I want to try and make, just considering both of those points within Cosmos, is us as human beings are so very limited with what we perceive is around us. We think we know everything, but we’re so very limited.

What we actually are is a mammal, that has a brain, that has five senses, and those five senses try and comprehend the world around us the best that they can.

The best way I can describe this, so if you think about optical illusions, what’s the first thing you see there? Two faces? There’s two…Yeah? There’s a Mexican. Candle stick going on as well. If you’re thinking about this objectively, that’s just an image, right? But, everybody sees something different in different ways, and that’s where that kind of interpretation comes in.

Then, there’s that dress. I see white and gold, but I know I’m wrong. Yeah. Okay. Yeah, so there again, another perfect example, right? But, this relays further down to what we do a little bit more as well.

Someone might see a Ferrari for example and think: “Gorgeous car. Something I would want one day. Look at that. It looks brilliant.” Another person just looking at the exact same thing, will go: “Oh, that’s chauvinistic. I don’t ever want that. It’s not particularly practical. I can’t fit babies in there. I’m never going to go for a Ferrari.” But, it’s the same thing, right? What’s right? There is no right. It’s just what people perceive it to be.

We want our ‘world views’ reinforced

Seth Godin, I’m an admirer of his, in regards to some of the work that he does and the books that he writes, he calls these ‘world views’. What world views are, are how people perceive certain things to be. This person here might think owning a Ferrari is the pinnacle. Is something that’s going to make him better. Is something he associates himself with and is how you should live life. That’s how he sees it.

Seth Godin goes on to say: “People don’t want to change their world view. They like it, they embrace it, and they want it to be reinforced.” Just going back to what we’re saying about the whole thing about Cosmos, everything’s going around, the processor is your brain, that processor is biased towards certain things. That guy’s being, “Ferrari’s are brilliant”.

Ultimately, whether we like it or not, from the capitalism and consumerism and so forth, whatever we think about that is what the modern economy is built on. If you start thinking about things like Gucci, we are tapping into people’s world views about that is the sort of thing that they want to associate themselves with. Products and services that understand world views tend to succeed. A great one there, in regards to Christmas. The ones that don’t, fail.

Zooming back in, to our very, very tiny world. I just want to give you that sense of perspective again of us as a species and what we’re there for. You can argue that us as a species, the main goal for us is to survive, and it’s to make sure the planet that we live on is okay and we’re all okay as individuals, right? Or as a collective, sorry.

One way that we do that is by trading, is by going between independence towards each other, so some person might be great at groceries, some people might be great at cooking, and we work together to do that. We use an economy and trade to get things done. That’s happened from day dot, and it’s happening now, just on a digital, more global level, where we are trading between different countries. We’re trading digitally on a regular basis.

Where do we sit in as advertisers? This is where I get to my point. We connect the dots. So, if you start thinking about, let’s say, someone who wants a Ferrari in Southwark in London. “I really want to get a Ferrari.” Us as marketers would go: “You want a Ferrari? Well, we know someone over there that sells a Ferrari. You should probably go talk to him.” It’s very simple, but that’s what we do as an industry.

Equally, someone might say: “I really want to start selling coffee.” We’re going: “Okay. We might some people with a certain world view who want to buy your coffee, so we’ll give you that information to do that.” Ultimately, that is what keeps our economy going. That keeps food on our tables and us all fed. Whatever you think of capitalism, consumerism, that’s the way that the modern world is working at the moment.

The question is: “Am I making the right difference?” This is talking about how you do the marketing. What sort of things you market to them. For example, this is something by the NRA. It’s an advertising campaign. It says: “Keep your hands off our guns.” If you’re thinking about us and our tiny planet with our little species, do you think that this is going to be progressive and is going to be cohesive to us?

If you’ve seen this before, this is an antibiotics campaign, and yeah. It just shows you how we can do things for good. But it’s not just being as direct as antibiotics and guns. This is an advert for chips. Chips are just as important too. They feed people, and McCain keep people in jobs. That’s one thing. What I like about this is the softer thing, so it’s starting to encourage cohesion. It’s starting to encourage family. It’s starting to break boundaries between certain ethnicities and groups and so forth, to start understanding that we are one species, and not trying to kind of segregate. We’re breaking barriers by putting this in front of people.

I’m going to finish off by saying that, from my perspective, advertising is one of the most powerful tools for change. It’s up to us to use it right. 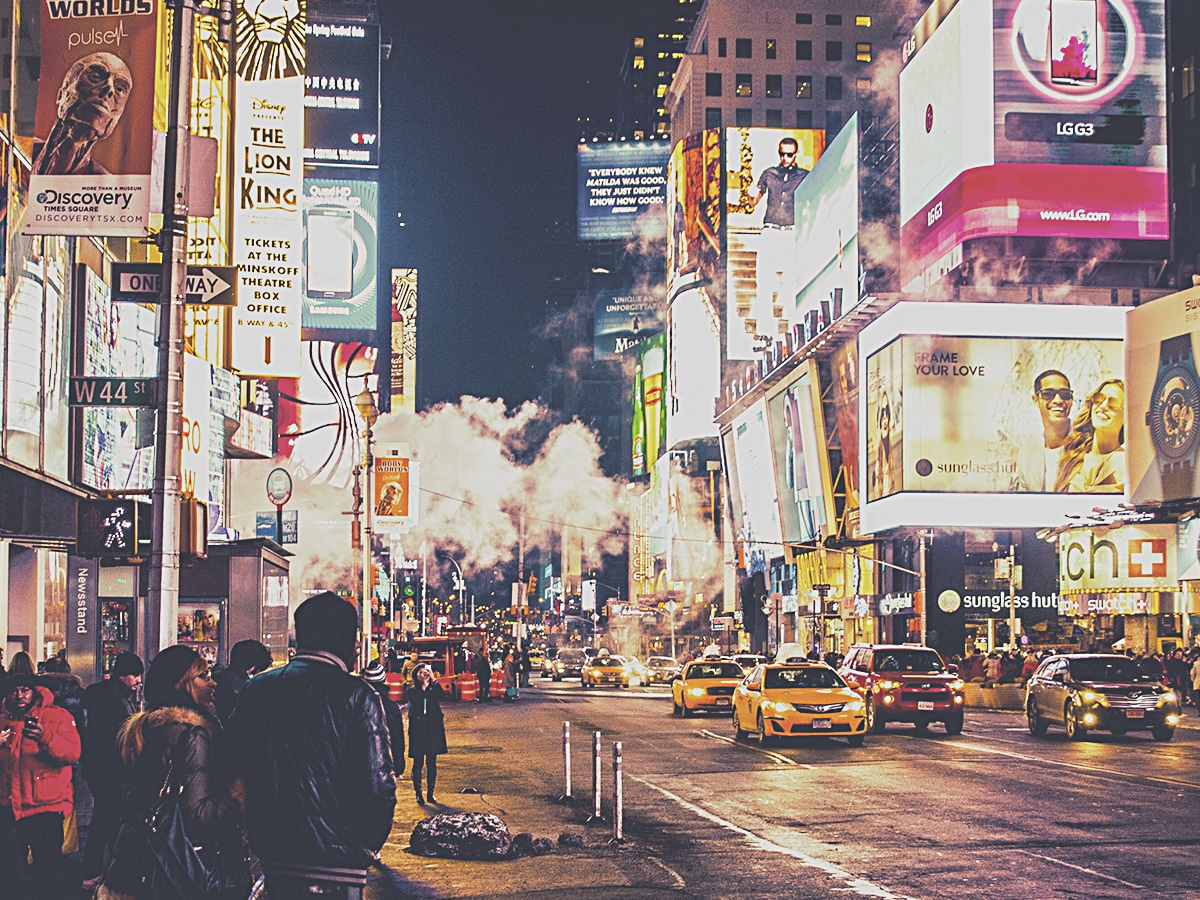