Expanded Text Ads, announced at Google’s Performance Summit back in May, have gone live within the last couple of weeks. We wanted to break down what they’re all about and see what impact they will have on ad campaigns.

The whole point of the Expanded Text Ads (ETAs) update is that the character limit is much higher than before. Previously, ads followed a 25-35-35 rule: one 25-character headline and two 35-character description lines. With the new update, you get two headlines with 30 characters each and one description field with 80 characters, as shown below:

You’ve now got 45 more characters to work with, but what’s the best way to use them? And how will the update impact your existing ad campaigns?

The most important thing to note with this update is that you have a lot more space to get creative with your ads. Your ads can now have a more conversational tone, rather than just focusing on the hard sell. It’s a good idea to experiment with what copy is best for your ad; don’t just add a second headline onto your original ad and call it a day, play around and see how you can optimise it further. This is the example Google gave at their summit, and you can see how the headlines and description has been reworked to optimise the ad: 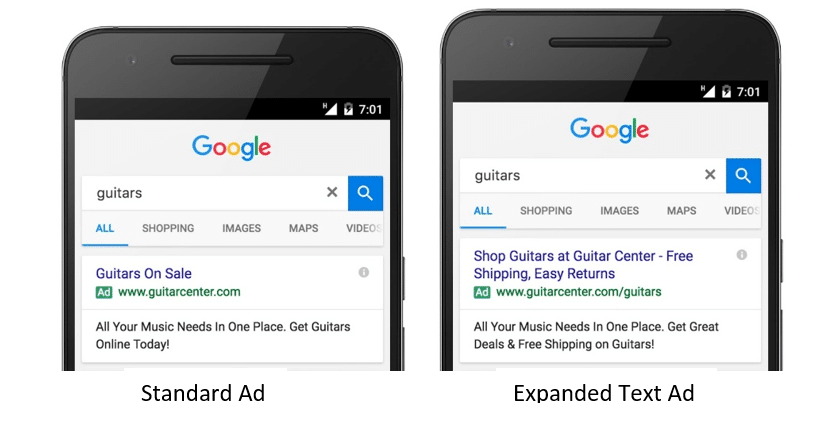 Move your keywords around, add in another call to action, try long or short descriptions. There’s still an opportunity to experiment with ETAs, as standard ads can still be created and edited until the 26th of October. Compare your standard and extended ads and different extended ads and see which perform the best.

Although this update might seem like a great opportunity to improve your ads, you need to take some time to properly analyse your ETAs to make sure they’re fully optimised. Looking at our clients’ ad campaigns, we’ve found that they are generally showing an increase in CTR when ETAs are used, but there have been cases where we’ve seen a decrease.

One of the most important parts of optimisation is making sure your headlines haven’t been affected by the format of ETAs. On mobile, the second headline can sometimes be cut in half to make it fit on two lines, and there have been cases where the second headline has been truncated on desktop. Google has acknowledged the latter problem, and recommends keeping the total character for both headlines to 33. So don’t get too carried away with the amount of characters you have, it’s OK to keep it short if you don’t want to get cut off.

That being said, it’s probably a good idea to put your most important information in the first headline, so if the second one does get cut off, people will still see the main focus of the ad:

Although the second headline has been cut off in this example, the user can still see what is being advertised from the first headline

Keep an Eye on Your Ads

As these changes are so new, it’s difficult to predict the best way to use extended text ad campaigns. Overall, we think that ETAs grab users’ attention better than standard ads, but need a lot more attention and analysis. Remember: the new rule is 30-30-80, but don’t get too carried away with it. Keep experimenting with your ads, but it might work out that shorter headlines work best for you.

Some marketers will take a “wait and see” attitude, allowing events to unfold before fully understanding what will not be possible when third party cookies are finally banished.This is not an advisable path. Here’s an essential read on where the industry is heading and what you need to do to prepare.

Rebel Energy plans 2021 launch with the appointment of RocketMill

The Rebel with a cause, the company doing energy differently is gearing up for it’s launch into the market this year and have appointed RocketMill to support their marketing effort. Rebel Energy is a UK energy supplier that is transforming the very business model of what it is to be an energy company, they are […]

Making the most of your Google Ad Grant

Google offers advertising grants for charities Times are tough for charities, now more than ever, and many are struggling to stay afloat with an increase in demand for services, and usual means of fundraising not possible since the COVID19 outbreak.  However, thousands of nonprofit organisations, serving a wide variety of causes such as health, education […]