Why we’re excited about price extensions

As a platform AdWords is always developing, most visibly through the launch of different types of ad extensions. From long-time stalwarts like sitelinks to alphas and betas that may never see the light of day, there’s plenty on offer.

This post looks at one newer extension available to advertisers: Price Extensions.

Price Extensions have been around for a while, and were originally known as Table Extensions. Initially a mobile format, they allow advertisers to call out specific products and pricing directly in the ad unit, and provide clickable links (similar to sitelinks) through to each one.

An update in early March 2017 announced that Price Extensions would now start appearing for desktop queries. It’s a great time to give them a try now they’re eligible to show across all devices, especially if you’ve held off based on mobile performance.

At RocketMill, we’ve been testing Price Extensions out, and we’ve discovered several things so far:

It’s worth considering your price in-market and versus competitors before running these extensions. Whilst it’s good to have a tempting price in place, there’s also the potential to use this format in some creative ways (i.e. dispel any preconceived notions around pricing or qualifying clicks for high price items).

Additionally, you should consider any mentions of pricing in your ad headline and descriptions – these extensions should support the message, not contradict or confuse it.

There is plenty of flexibility in the setup, with varying time periods, units and price qualifiers available. There is also a short description space allocated to each item, although this may be shortened or omitted.

The full versions shown above seem to be in the same “class” of extension as sitelinks, with one or the other showing (given the space an ad unit would take up, this makes sense).

There is, however, a “collapsed” version of the extension, that can show alongside sitelinks (shown by device below). There doesn’t seem to be a way to segment this down in Ad Extension reporting. 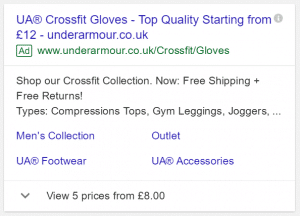 We’ve also seen quite a few impressions come through for these, coupled with a roughly equivalent drop in sitelink impressions over the same period. AdWords seems to be showing these fairly frequently, which is generally good news as AdWords automatically optimises which ad extensions show.

Segmenting performance out by device and by click type can see some interesting results (for accuracy, reviewing keywords in position 1 with a high impression share, top of page only):

The results have been encouraging so far, and Price Extensions can certainly become another tool in our arsenal when it comes to optimising accounts.

If you need some help making sure your account’s ad extensions are set up as best they can be, let us know! We’re on Twitter at @RocketMill.

Some marketers will take a “wait and see” attitude, allowing events to unfold before fully understanding what will not be possible when third party cookies are finally banished.This is not an advisable path. Here’s an essential read on where the industry is heading and what you need to do to prepare.

Rebel Energy plans 2021 launch with the appointment of RocketMill

The Rebel with a cause, the company doing energy differently is gearing up for it’s launch into the market this year and have appointed RocketMill to support their marketing effort. Rebel Energy is a UK energy supplier that is transforming the very business model of what it is to be an energy company, they are […]

Making the most of your Google Ad Grant

Google offers advertising grants for charities Times are tough for charities, now more than ever, and many are struggling to stay afloat with an increase in demand for services, and usual means of fundraising not possible since the COVID19 outbreak.  However, thousands of nonprofit organisations, serving a wide variety of causes such as health, education […]